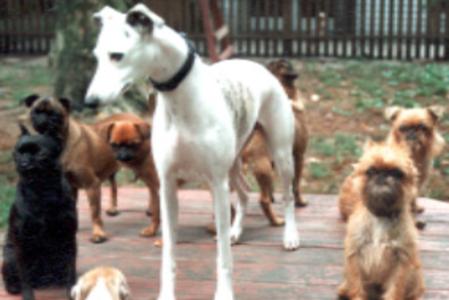 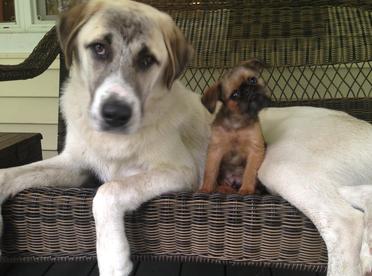 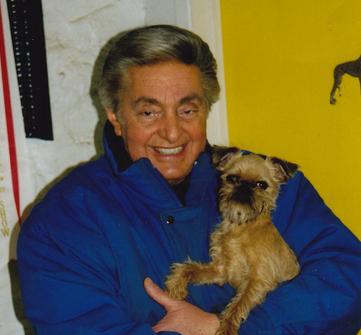 Friend & mentor Max Magder of Canada with the puppy who became my Champion Lorricbrook Red On Arrival.

Lar-Ana's Ben -- my first smooth Griff. Ben's brilliant expression won me over to the Smooth Brussels Griffon, in Europe called the Petit Brabancon. 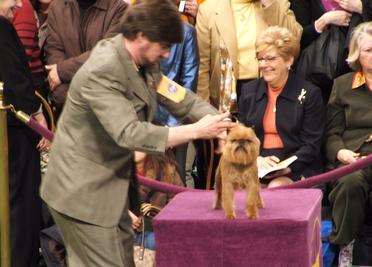 Brussels Griffons have been part of my life for more than 40 years. I acquired my first little darling, Chelsea, while still in college at Georgetown University. From the first moment, I felt this was the perfect breed -- sweet, easygoing, companionable, ready to be your friend under all conditions. And they are portable -- at about 10 pounds, they are easy to tuck under your arm and take anywhere!

My goal now is to breed healthy, friendly, smart Griffies to enrich the lives of their owners. For me, breeding dogs is a sacred commitment. These little creatures become part of a family. Each one must have everything possible to live a successful life.

After much research, including visiting breeding facilities for military dogs and service dogs, I decided to make the Super Puppy Protocol part of every puppy's life. From birth, we accustom the little ones to a small amount of stress every day. Their system learns to adapt and strengthen. Our puppies grow up to be friendly, stable, and outgoing. They never bite or run away in fear because they are accustomed to handling new situations, new friends, and new stresses.

Each puppy has my promise that he has a home here all his life. If the new owner has any problem, whether the first month or 12 years later, I'm here to advise or to take the Griff back, whatever is needed. No Parisfield Griff ever has to go to rescue or a shelter. He has a loving home right here that will always welcome him.

Many of our Griffs are champions of the breed. Some have been among the Top Ten show Griffs of the year. Others excel at agility. While we enjoy showing, the health and happiness of our Griffs is my main consideration.

Sharon Sakson is a writer, journalist, television producer, breeder and dog show judge.  Her  book is Paws & Effect: The Healing Power of Dogs, a look into the many ways canines come to the rescue of their human friends. She is also the author of Paws to Protect: Dogs Savine Lives & Restoring Hope and Paws & Reflect: A Special Bond Between Man & Dog. She is a freelance writer/producer of television programs in New York and has been a Field Producer for ABC National News, NBC Sports, CBS Morning News, and WNBC-NY. In addition, she produced programs for Court TV, Food TV and local television stations in Baltimore, Chicago, and San Francisco. She is the author of two Bantam travel guides, and writer of over 300 articles. She was an editor at The Wall Street Journal Newswires. She has a Master of Fine Arts in Writing degree from the New School for Social Research. She is a breeder of champion Whippets and Brussels Griffons under her “Parisfield” kennel prefix. She is an accredited American Kennel Club dog show judge, judging most of the Hound Group and some Working breeds. She has judged internationally in England, France, Italy, Switzerland, Germany, Russia, Sweden, Finland, Canada, Argentina and Taiwan. 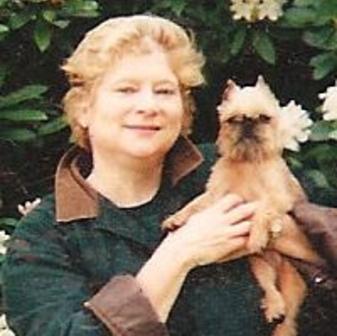